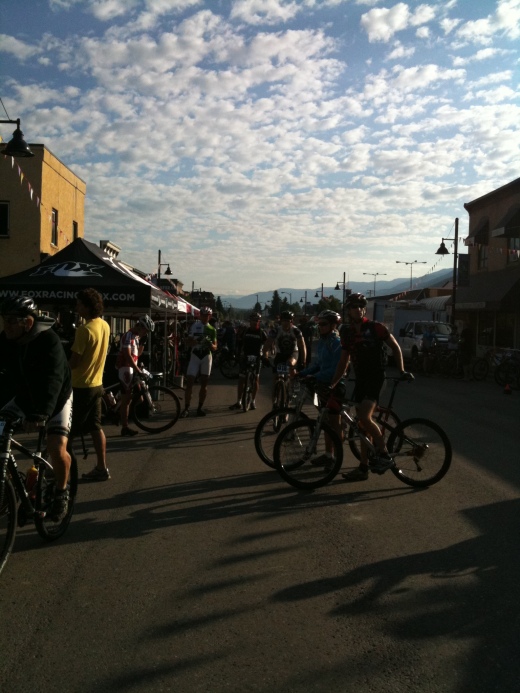 A dry sunny start, we followed the fire engines out of Fernie and headed for the hills, Dennis’s leg was on the mend, strapped well  with a jerry-rigged shinguard made from a mouldable elbow pad and a bunch of tape. Dan and Marty were in fine fettle, having shaken out the ya-yas on the prior day, there wasn’t much more technical riding than that on any section of today’s course. To the contrary, a  chunk of the stage was on dirt roads, gravel pack, while still climbing at a fairly stiff incline. We set off at a smart pace, but soon, Dennis’s nemesis, back spasms, were haunting him. We have tried bike saddle height, fore-aft and angle alterations. Tried different stem, bar alterations, with and without spacers. We spent the winter doing weights, core workouts and boot camp with our uber-trainer Ed. And still the power-sapping spasms. As we fell behind Marty and Dan (and more importantly, Cricket and Brian (who was towing her), I decided to help Dennis reduce his load by pushing on the steeper sections. I had done this the past year with good success, and as I felt strong, I was happy to be of assistance. Tucked behind his pack, I had one hand on his tail end and had hardly pedaled dozen times when WHAM, I was on the ground. My bar-end had gotten tangled in the pack, and whipped my front end around, dumping me on my knee hard.. Not feeling much pain, I glanced down at the bloody flap, saw that it was a deep one, and decided not to investigate any further. Back on the bike, I powered up and caught on the back of the group, settling into the rhythm and focus. 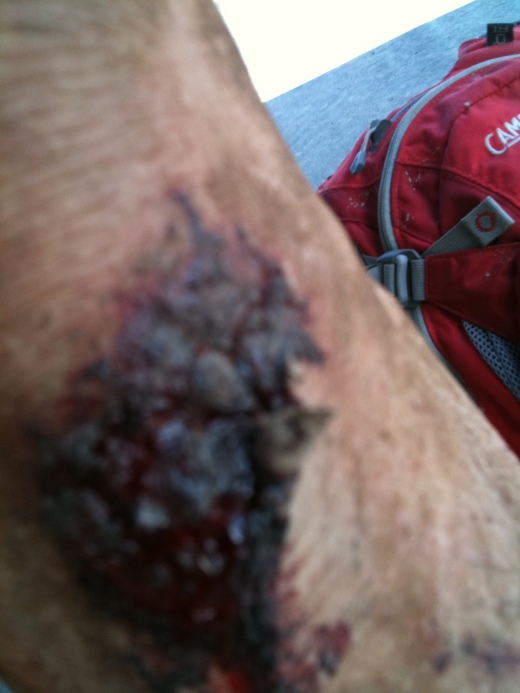 The climb was relentless, and including a couple of sections of fun singletrack, we were face up the mountain for close to 2 hours. We barely stopped at the aid station, just enough to stretch and suck down some electrolytes and fruit, before heading up the final section of rooty, wet singletrack to the peak, the top of the infamous Porky Blue trail. Snow pack had finally melted just the prior weekend, leaving swampy sections which kept us on our toes and the edges of our seats..Then an incredible 6k of descent, dropping over 1000m, it was open, scrabbly, loose and tight, with cliffs dropping off the edges of the switchbacks as well as the straights. Dennis was well gone after a rocky start over the edge, almost losing it in a tangle with Marty. Marty and I hopped on the back of D’s dust trail, hammering, sliding and skidding our way towards the valley floor. Marty buried his front wheel in a corner, maxing out his fork and sending him over the falls, his bike following in an incredible somersault into the bushes. Lucky. Had the same crash happened a few hundred meters further along, neither he nor the bike would have recovered. Jumping back out of the pine saplings that cushioned his fall, he hopped on and we slid, skidded and bounced on our way. I was loving my GF rig, I felt at times like the bike wasn’t even underneath me, hanging my arse back, saddle under my belly, chest low, chin up and smiling like Gene had instructed. My elbows were bent and wide, knees relaxed and balanced on both feet with full weight over the bottom bracket. The instruction from Better-ride camp was clear and dialed hard. The bike was doing its job handling the terrain, I was doing my job looking ahead, reading the trail, anticipating and then “Marty, there’s Cricket”.. “on your right Cricket, I’ll pass when you are ready”.. She was not happy in this stuff, and we had caught them with a couple of k ‘s to go.. As soon as I was out of earshot (I think) I “whooooooped” it up as we hit the remaining sections with berms, corners and a couple more dodgy hike/ slide sections. 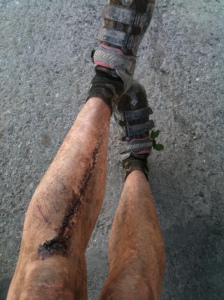 We met Dennis and the bottom, and with 15k remaining, we hit the dirt road hard. Dan was a little bit back, having started the descent ahead of us, he had burnt the oil in his brakes so hot that they failed him, on some steep pitches..He had to hoof it and wait for the fluid to cool, the only thing possible on such turf. A trip to the bikeshop would be in order again today, for all of us! Getting going on the road, Dennis barreled on the downhills and I pulled him on the climbs. We rolled in an alternating pace-line for 10k, and then turned once more into the singletrack for the final stretch. Fun fun fun. We ripped into town, and belted it over the line. 2 minutes ahead of Cricket and Brian, and less than a minute ahead of the lads. Phew. I rolled my bike to the medical RV and a quick analysis has me packed off to the Elk valley hospital for some stitches.

The lovely doctor, (again in combat shorts and a t-shirt!) made what she could of my “hamburger meat”  with three hefty stitches, and with a  tetanus shot, some novicaine and a flick of my credit card, I was outa there. Beer, dinner and ice. an early night and some strategic bandaging. Ready for day 3. The beast. Check it out..here! G’night..zzzz

all better, thanks doc..

Official race report here..Official photos here.(go to stage 2). Spoiler alert, it was nothing like OUR race ! : ) 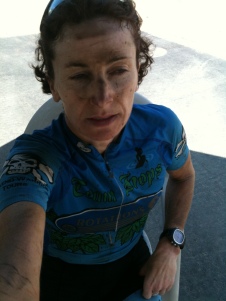